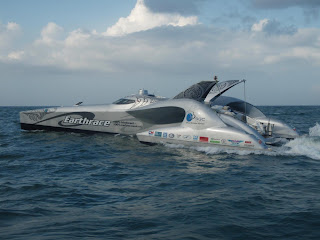 5/6/2008
EARTHRACE, the radical 78 foot wave-piercing trimaran, skippered by Kiwi
Peter Bethune visited Palau on both of her round-the-world-record attempts.
Fueled by bio-diesel, the space age looking machine, was chasing the record
set by Cable and Wireless many years ago. Earthrace failed in her first
record-setting attempt due to technical problems with her engines however,
despite a number of challenges on the second attempt, that included damage
to her propellor and shaft from hitting sea-debris near Palau, EARTHRACE
completed her circumnavigation in record time and beat the previous record
by about 14 days.

Members of EARTHRACE crew were awareded with Honorary Lifetime Membership in
RBYC for their contributions to circumnavigation and the spirit of
adventure. RBYC is proud to be associated with EARTHRACE and honored to have
such distinguished and accomplished individuals as Peter Bethune and crew on
our membership rolls.

Posted by Royal Belau Yacht Club at 11:14 AM 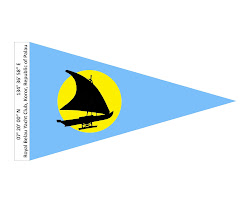